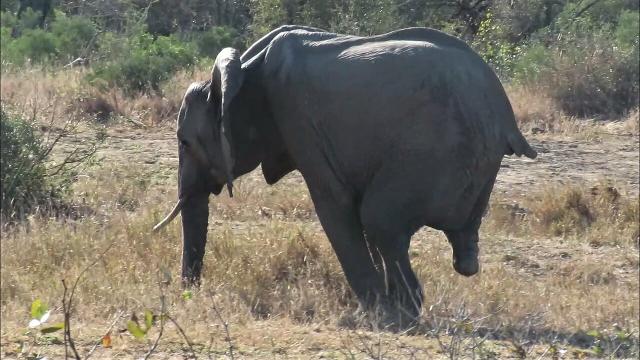 There are times when rare events and sights in the African wild can absolutely stun you. I recently came across one of those rare and very unusual sights; an adult male elephant with one leg amputated, amazingly walking around and surviving in the Kruger National Park, South Africa. It was in the middle of a hot day in a private rest camp in the Kruger National Park. Safari guests were taking a break from the heat after a long morning safari drive.

The beauty of this rest camp was that there is a watering hole in the front of the camp. This gives everyone the opportunity to enjoy game viewing from the comfort of the rest camp located in the shade. A large herd of elephants came to visit the watering hole during the heat of the day and made for a spectacular sight in front of the camp. After quenching their thirsts, the herd of elephants slowly started moving away from the water. From the opposite direction, a lone elephant appeared from the bush approaching the watering hole. This elephant was clearly one of the stragglers in the herd. We suddenly noticed there was something very strange about the way this elephant walked and to our shock realized that this adult male elephant was walking on three feet only. I have never seen anything like this in my life. I ran to grab my camera and started filming this bizarre looking sight in front of us.

It was incredible to see how this male elephant actually managed to move forward. It did not look very comfortable at all but he was moving forward effectively. Due to this slow walking manner, the male elephant was clearly lagging behind the rest of the herd. The first thought that came through my mind was that this elephant must be in incredible pain after losing part of his leg. After closer inspection we realised that the amputated leg had no signs of any raw flesh and we did not see any blood. With the relief of knowing that the elephant was not walking around with a raw open wound, we come to realise that this male elephant has been going like this for many years. We could even see the cracks on the worn skin at the bottom of the amputated leg, which also appears on the feet of elephants. My sense of shock turned into a huge admiration and level of respect for this male elephant.

The African wild is one of the toughest places on earth to survive, and that is said for animals with all their limbs intact. This male elephant has taken determination to survive to the next level and we are sure, even though he was lagging behind, the hundred plus elephant herd that he belongs to has protected him all along against the many predators such an animal can easily fall prey to. The most accepted reason to why the male elephant lost part of his leg was that he most likely got caught in a snare during his young years and in the process lost that part of his leg. This male elephant gave me a whole new level of respect for the determination for survival of the African Elephant.