A mother-of-seven with more than 800 tattoos claims she was ‘forced’ to watch one of her children’s nativity plays through the window from outside their school.

Melissa Sloan, 45, from Powys, South Wales, regularly receives criticism for her alternative look, and said she no longer felt comfortable going to her watch her child’s Christmas play.

The ‘tattoo addict’ has previously claimed she had been uninvited from festive parties and that her Christmas Day plans had been ruined after the pub she was planning to go to barred her due to her extreme inkings.

‘No Christmas parties and when I go to my child’s school I don’t get invited,’ Melissa told the Daily Star. 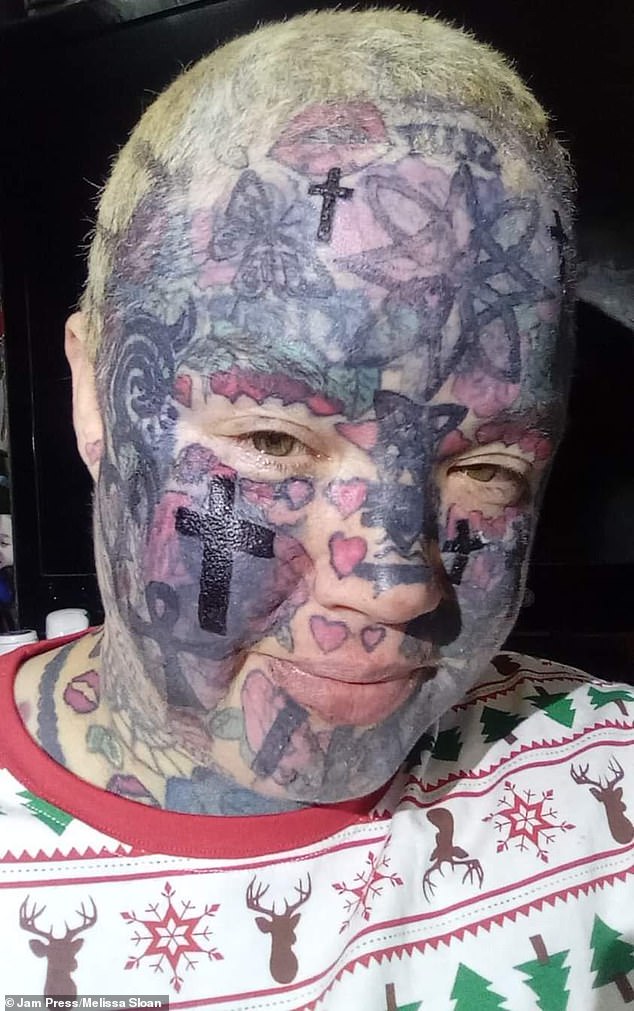 Melissa Sloan, from Powys, South Wales, gets new ink three times a week and even tattoos herself with a £120 ink gun she bought on Amazon

‘They said once for me to go to the back garden and look through the class window.

‘The teachers told me to do that, that’s why I don’t go to the school play.’

Melissa says she gets inked at least three times a week and even tattoos herself with a £120 ink gun she bought on Amazon.

The mother-of-seven got her first inking when she was 20-years-old and has since covered most of her face and body with different dyes and symbols, previously telling Femail she does it to cope with the impact of childhood abuse by her brother. 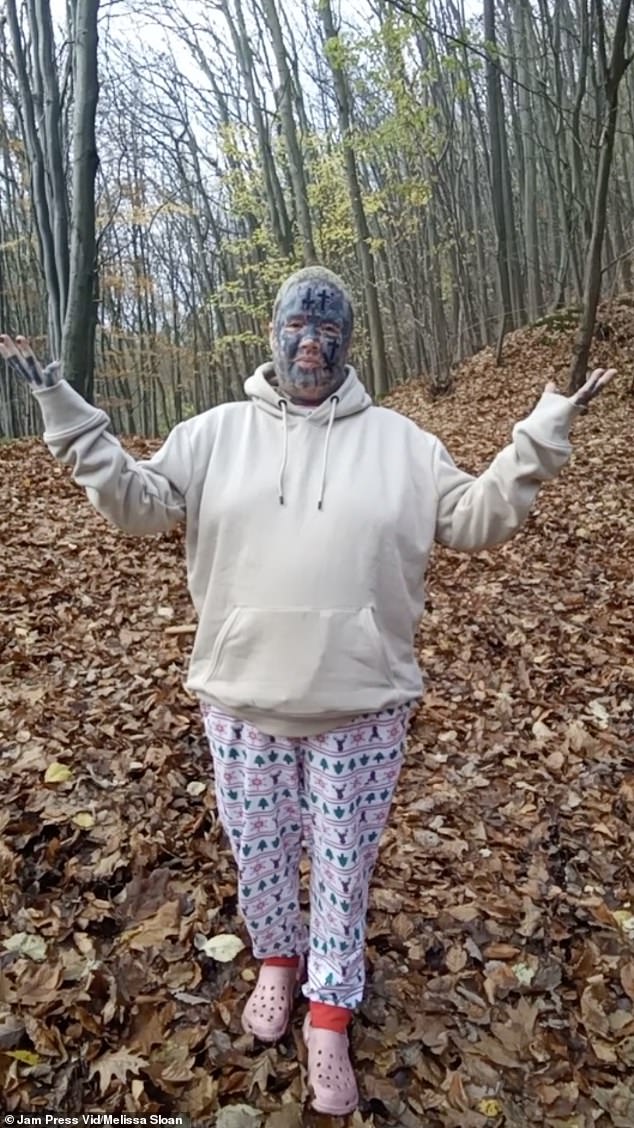 The mum claims she has been called ‘Crayola’ at the school gate and has started to be uninvited from Christmas parties.

Her tattoos have made her social life much harder over the festive season, according to Melissa.

She said: ‘I want to enjoy myself and go for a drink at the pub, but they won’t even let me in.

‘I’m covered in tattoos, I’ve got 800 in total. l get tattoos three times a week. I even do my own tattoos at home.’

Despite multiple infections the ink-fanatic vows to never stop marking her body. 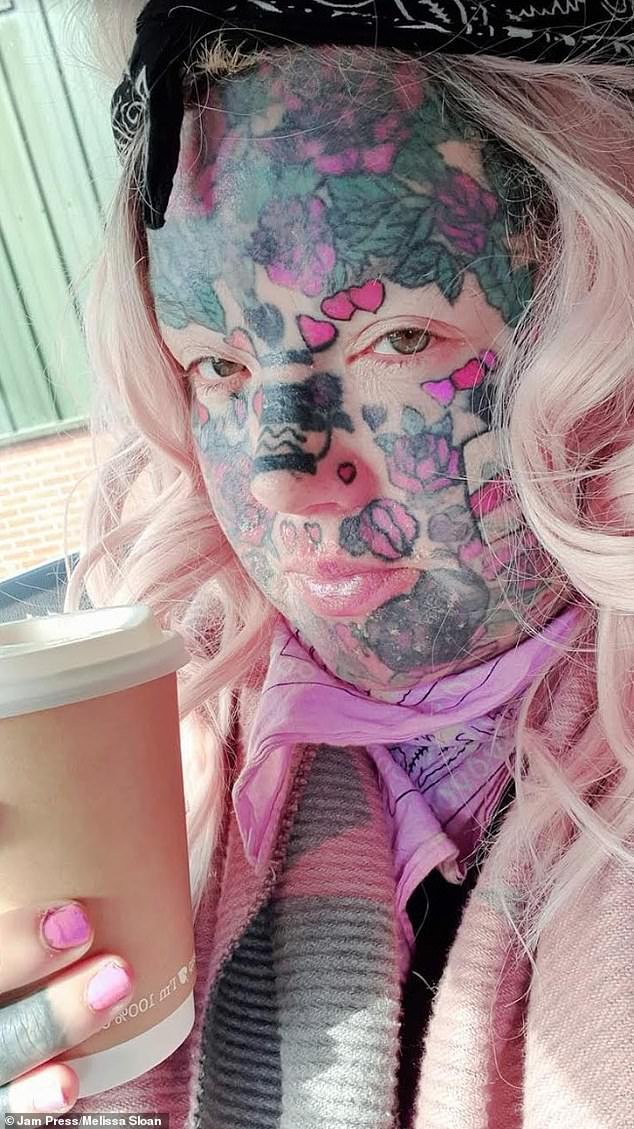 The mother-of-seven got her first inking when she was 20 and has since covered most of her face and body with tattoos. 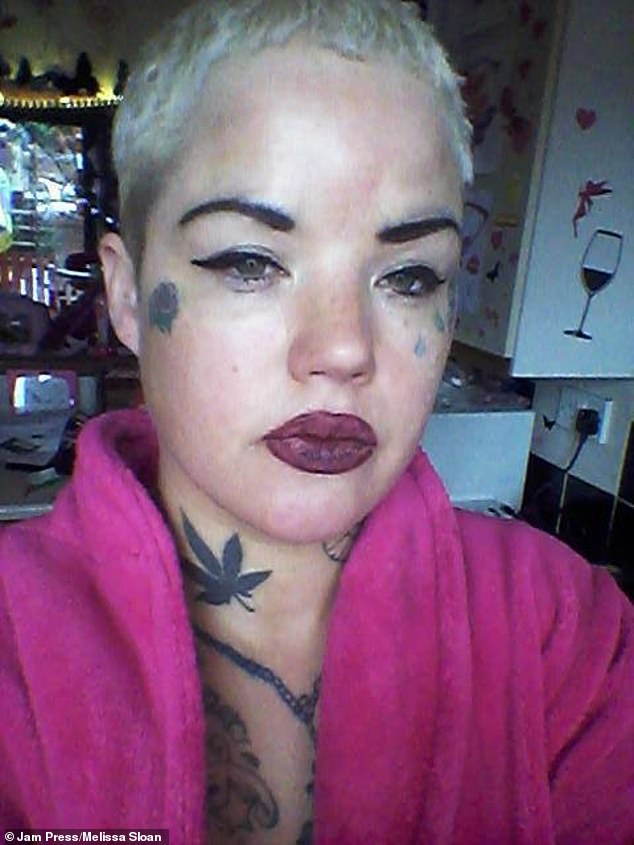 The 45-year-old claims she has called ‘ Crayola’ at the school gate and has been uninvited from Christmas parties. She’s pictured here before she got most of her tattoos 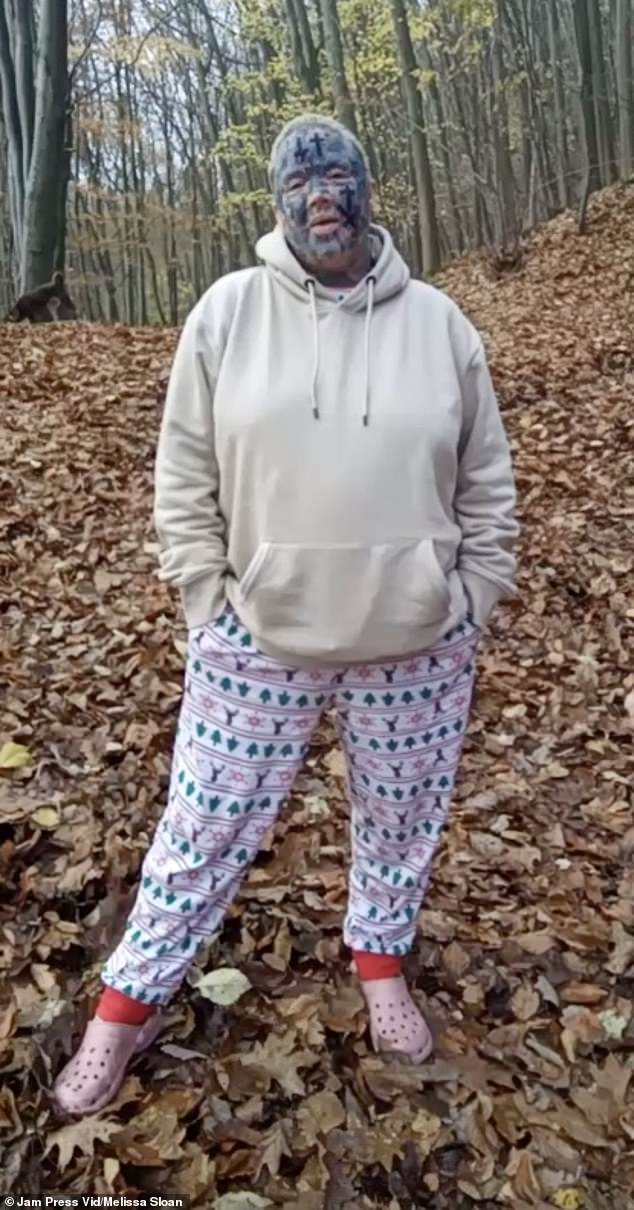 She said her skin has fallen off from tattoos that didn’t heal and she has been left with scars, but vowed: ‘I will never stop having tattoos until the end.’

Although some of her ink was done by professionals, many were also tattooed by her partner Luke, 56.

She also said that two of her primary-school-aged kids have added their own designs to her back. 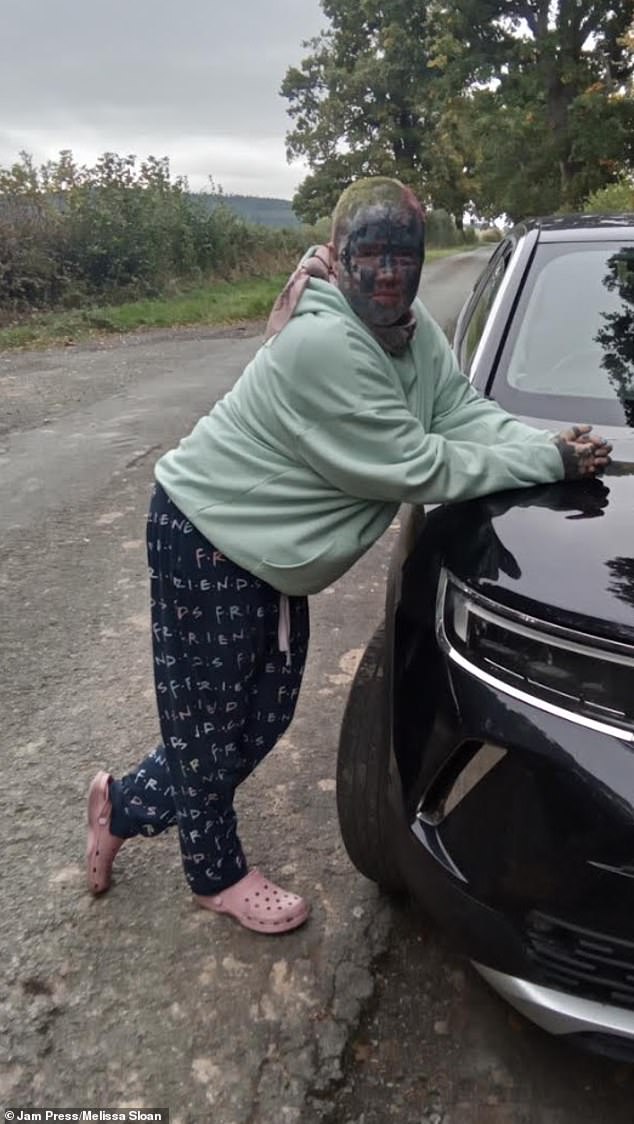 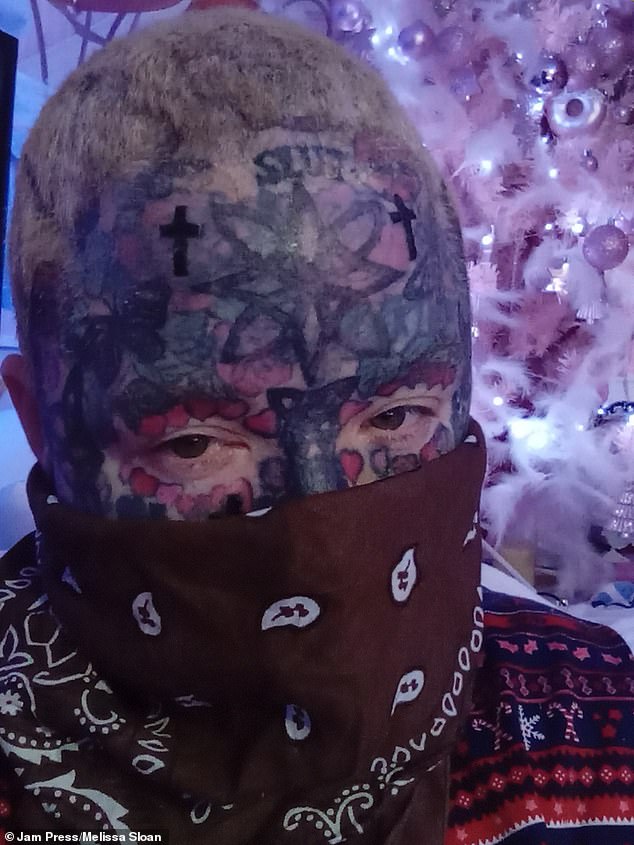 Although some of her ink was done by professionals, many were also tattooed by her partner Luke, 56

It comes after Melissa claimed her ‘prison-style’ tattoos were standing in the way of her getting a job.

On trying to get work, she said: ‘If someone offered me a job tomorrow I would go and work – I would take that offer.

‘I expected this in life. I can’t fit in with people as I like to be me and I’m always going to be myself.’ 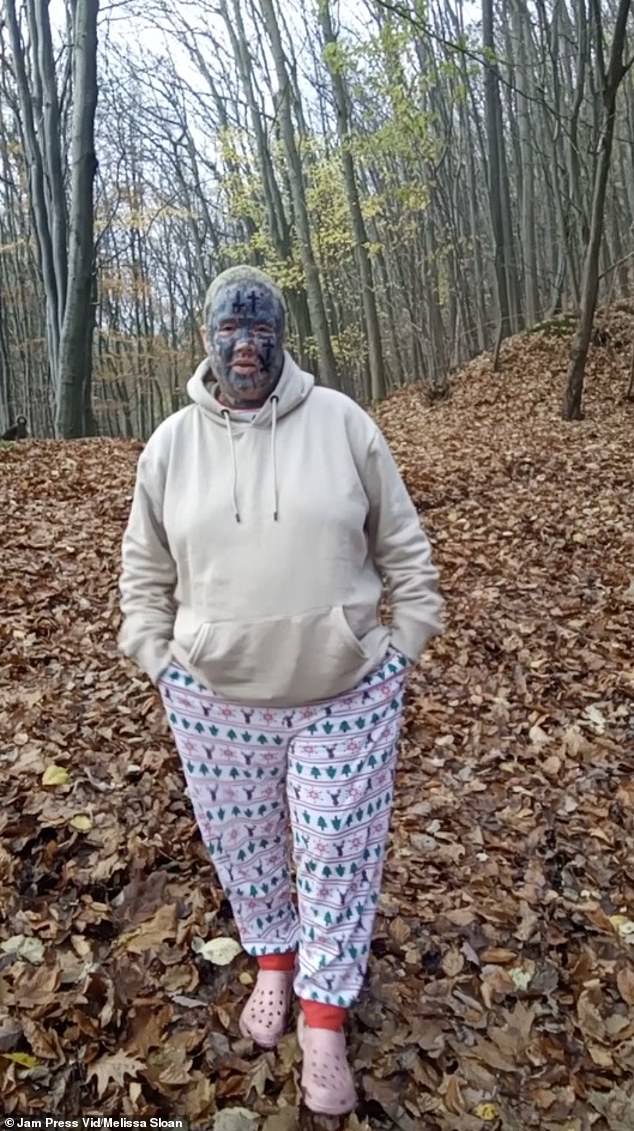 In May, the mum revealed that her tattoos were a way of coping with the sexual abuse she suffered as a child at the hands of her elder brother.

Gavin Sloan, 46, was jailed for 21 years for a string of sickening rapes and sexual assaults against other children earlier this year.

‘My tattoos help me cover the emotional scars that Gavin left behind,’ Melissa said.

‘They’re my mask and I hide from the world behind them. But now that he is finally in jail, I can begin to feel free.’ 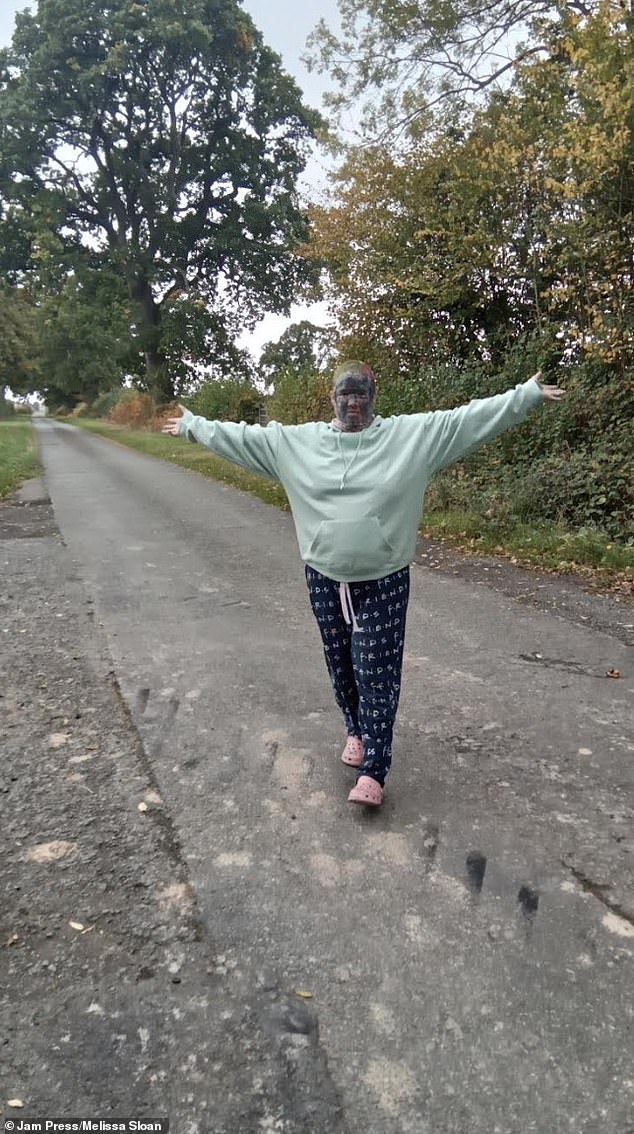 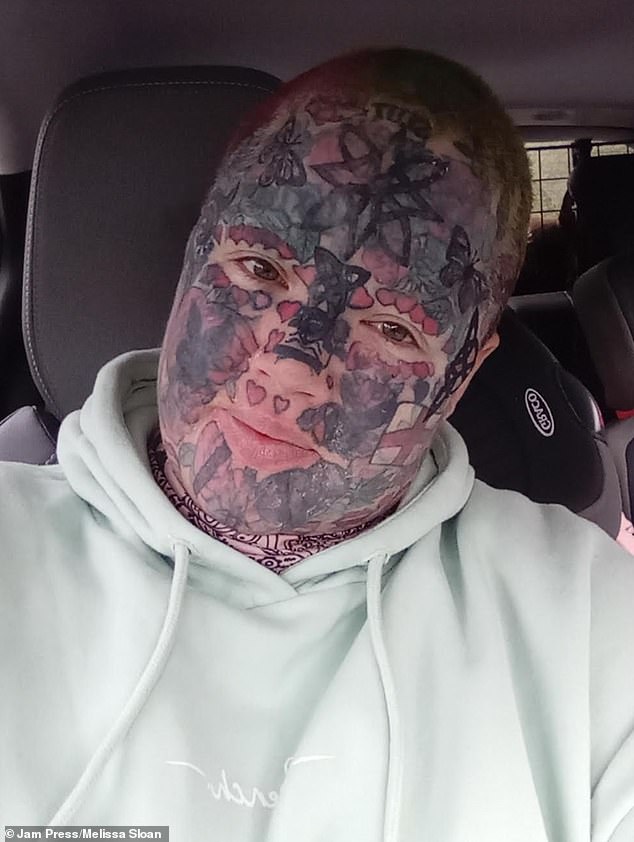 In May, the mum revealed that her tattoos were a way of coping with the sexual abuse she suffered as a child at the hands of her elder brother

Melissa claims her complaint was not taken seriously by police and he was never charged with the alleged offences against her.

Melissa and Gavin grew up in Kidderminster, Worcestershire, with their mother, Doris, and two other siblings. Melissa is one year younger than Gavin.

She said: ‘Gavin and I have the same mother but different fathers, but we were raised as brother and sister. As tots we shared a bath together, as siblings do.

‘But when I was six, and he was seven, Gavin touched me down below in the bath. I told my mum, but we were both small children and she brushed it off. She didn’t really believe me. 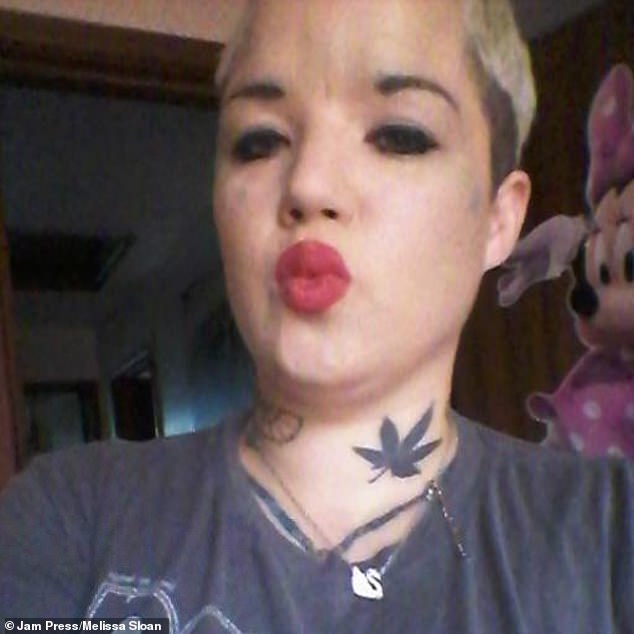 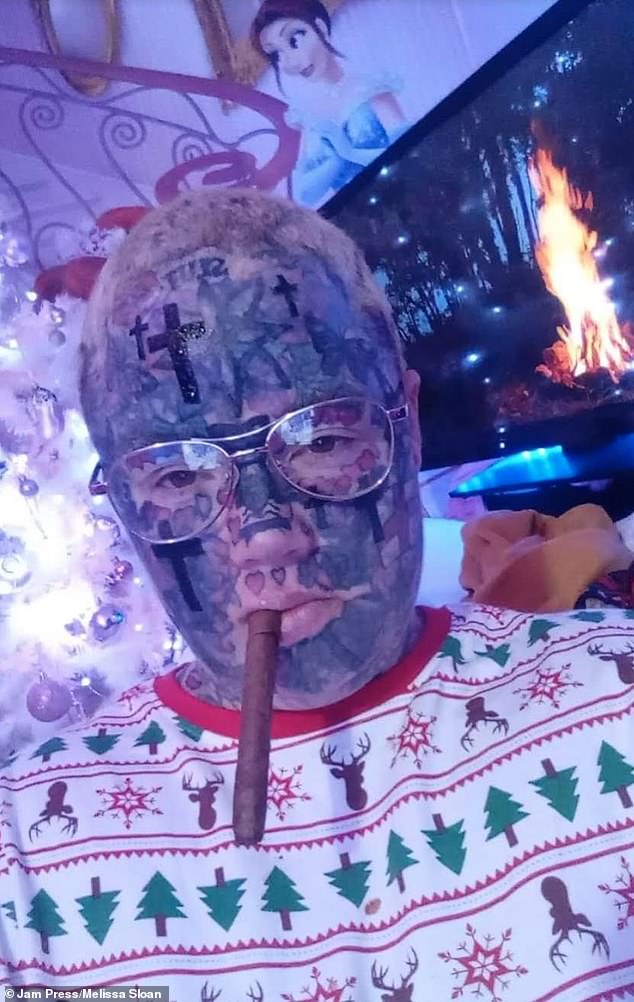 Melissa and Gavin grew up in Kidderminster with their mother, Doris, and two other siblings. Melissa is one year younger than Gavin

‘But it carried on and it got worse when I was in my teens. Gavin and I shared a bedroom, and he took every chance he could to grope me, and he tried to make me perform sexual acts on him. He drilled a small hole in the bathroom door to spy on me.

‘I grew up thinking it was normal. He told me it was fine because he was my half-brother.

‘I tried to fight back against him, but he was stronger and very aggressive towards me.

‘He called me sexual names and made inappropriate comments. I saw him kill birds and small animals and I was very frightened of him.’ 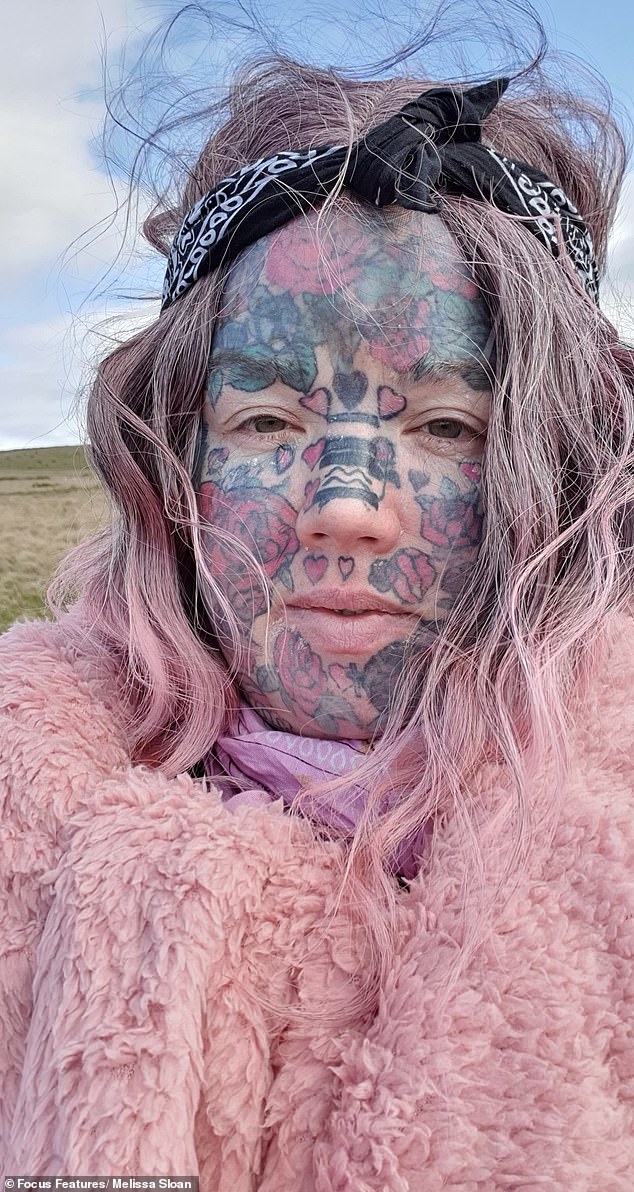 Melissa Sloan, 45, from Powys, South Wales, has covered her body in tattoos to blot out the memories of being sexually abused from the age of six 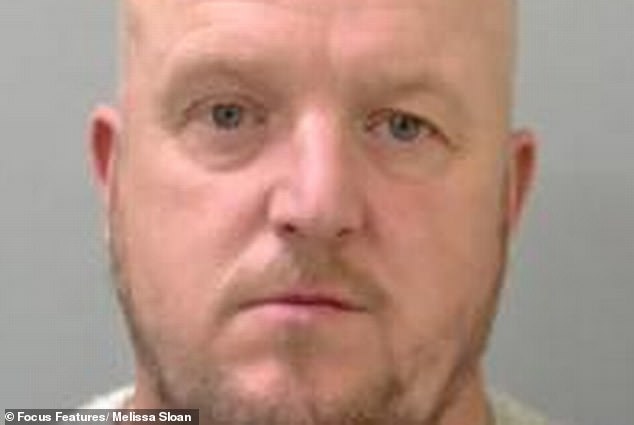 Melissa’s half-brother Gavin Sloan, 46, was jailed last week for a string of sickening rapes and sexual assaults against other children

Melissa said: ‘I found the tattoos very therapeutic; a way of blocking out the past and also the abuse.

‘Gavin got in touch again, and even as an adult the suggestive comments continued. He just didn’t seem to see that it was wrong.

‘When I was 35, I made a complaint to the police, because I was worried that he would do it someone else.

‘I was interviewed, but that was it. Nothing came of it, and I went away thinking that I had left it too long.’